How to Treat 8mm of Gingival Display: A Dentofacial Orthodontic Case Study

This is a case study done of POS graduate and instructor, Dr. Maribel Eizaguirre. Learn how she grew her orthodontic care by treating this advanced* gummy smile case.

We spoke to Dr. Maribel Eizaguirre, who has been offering comprehensive orthodontic care since 2010. She has helped a range of patients with orthodontics and enjoys seeing patients satisfied with their new smiles when she takes off their braces. We saw some of the patient transformations and wanted to share her story on one of her first patients.

Dr. Eizaguirre runs a full service practice in Spain, and enjoys being able to help patients with treatment plans that best fit their needs. Having taken courses in aesthetics, implants, prosthetics, endodontics, and orthodontics, she told us how she takes great pride that she can often help her patients with multidisciplinary treatment plans. She told us that Diana is one of her patients that she was honored to do dentofacial orthodontic treatment with.

Eizaguirre told us that she is good friends with Diana and was proud that she agreed to be one of her first orthodontic cases. Diana knows hundreds of dentists as she helps many of them as a POS technical support staff in Spain. After many years at POS and seeing similar cases to her own turn out well, Diana decided to let Eizaguirre and Corvera, a POS graduate, treat her for crowding and gummy smile.

POS had recently released new developments to help treat gingival display without orthognathic surgery, and Diana had confidence in both Eizaguirre and the orthodontic system. Additionally, they enlisted the help of Dr. Mariana Corvera to do the necessary surgeries. Eizaguirre mentioned how they were helping each other, Diana was gaining a healthy, beautiful smile and Dr. Eizaguirre was able to develop her growing orthodontic skills with a kind friend and great patient. 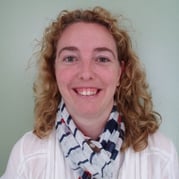 After doing a thorough orthodontic analysis, Eizaguirre found that Diana had a 90° deep bite and deep Curve of Spee. Records showed that she was missing teeth 26, 37 and 46 and had a posterior cross bite. They saw a slight 2-3 mm of asymmetry with her upper midline, as she had a 4 mm Class II on her right side and a 3 mm Class II on her left. Diana was dental Class II with crowding and skeletal Class II.

Diana's chief complaint, gingival display, has been an area in orthodontics that is known to sometimes be tricky. But luckily, Eizaguirre had POS' new gummy smile protocols to enable her to be successful in treating it. Since there can be many factors contributing to gingival display, she checked to see if the excess display came from her soft tissue, lip size or mobility, or mandibular deficiency, but those factors were in the normal range. Her analysis showed that the 8 mm of gingival display came from a maxillary vertical excess, making this case even more advanced.

The cephalometric analysis showed that Diana was vertically open, with a maxillary vertical excess and dental protrusion. Note: red numbers are out of the normal ceph ranges.

While working up Diana’s case, Eizaguirre looked into different treatment options. She considered non- extraction (with Class II elastics), orthognathic surgery and extraction treatment plans. They ultimately decided on a treatment plan that started with extractions, followed by skeletal anchorage, as this would give us great dentofacial results while avoiding surgery.

Eizaguirre decided to treat Diana by extracting the upper 6s and lower 8s then used skeletal anchorage to distalize and intrude the upper arch. The objective of the treatment was to intrude the entire upper arch in order to reduce gingival display and retract the upper anterior teeth to correct her Class II and overjet. They first extracted the upper 6s (26 was already missing) to obtain space to retract the upper anteriors. Eizaguirre decided to close the lower 37/46 space by retracting the lower anterior slightly.

Eizaguirre took care in deciding which tools she needed to best treat Diana. She used custom IP Appliance® brackets to have a more effective correction. Eizaguirre took advantage of IP Appliance's cuspid torque features by using Li brackets on the upper arch to help retract on a rectangular archwire. I chose molar buccal tubes 17/27R2tipD and 38/46UP to close 6/7 spaces. She also used tapered small archwires for mechanics, then changed to ovoid small 18x25N for finishing so that Diana could have a wider smile. Once Diana’s teeth were in the right position, we started working on her vertical dimension and gained more anchorage through skeletal anchorage treatment and crown lengthening.

Eizaguirre mentioned being very grateful to being able to collaborate with several colleagues to ensure Diana's success from the beginning. She stated how much she appreciated the generous help and support from POS instructors, Dr. Donald McGann, Dr. David Dana, and Dr. Elena Canela, as well as the generous clinical work and cooperation from fellow POS graduate, Dr. Mariana Corvera and her staff, from Clinica Dental. 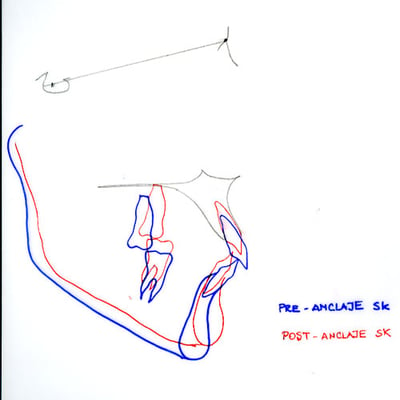 Overlays before (blue) and after (red) of the skeletal anchorage procedure
You can see how the upper arch was successfully distalized and intruded
Shared by Dr. Mariana Corvera

How Did Diana’s Case Turn Out?

After four years of treatment, they were able to give Diana lip competence, improve her symmetry, straighten her teeth, fix her cross bite, reduce the wear of her teeth, and create a balanced, healthy and beautiful smile! They achieved Class I on both sides and went from 8 mm of gingival display to 1-2 mm. It was an amazing transformation. Many instructors have mentioned that Diana’s case had results similar to orthognathic surgery and it made the team happy that they were able to provide such a significant transformation without needing invasive surgery.

Eizaguirre mentioned that Diana is happy and her bite and smile are both fantastic, and that is what counts most to her. Diana and Eizaguirre's brother were her first two orthodontic patients and she cannot thank them enough for trusting her to provide orthodontic care to them.

*About the difficulty of Diana’s case:

This case is considered a more advanced “Section 4” orthodontic case because there are more potential areas of unwanted tooth movement to consider. In Diana's case, there was a design with 4-5 mm of molar intrusion and 7 mm of incisor intrusion, which was successful. When you intrude the posterior molars 4 mm or more, they tend to flare out buccally, sometimes causing buccal cross bite. To control the transverse predictably like this case, most dentists would need more training or mentoring. Controlling the direction of forces like these as you move teeth forward or backward is very helpful and all dentists can do this after getting the right training and practice. Advanced does not necessarily mean very difficult to do, but just that more knowledge and dedication is needed to ensure success.

Getting Support and Acknowledgements

Thank you to Dr. Eizaguirre, Dr. Corvera and her team, Dr. McGann and Dr. Dana for all the effort in achieving such a successful result.

When Eizaguirre started working on Diana, she was new to orthodontics, in just my second seminar of POS’ Comprehensive Orthodontic Series. She found out that Diana was a more advanced case, something that graduates of Seminar 16 (the Dentofacial Orthodontic Series) are more equipped for. However, Eizaguirre was encouraged to work with Diana and was happy that she always had the support of Progressive Orthodontic Seminars and its instructors, including Dr. Donald McGann.

As a “rookie” Eizaguirre admits that she made some mistakes, extending the time of the case, but mentors guided her to recover well. Although the case took longer than normal, Diana and Eizaguirre feel that the result was worth it. Diana states that she loves that she doesn’t have excess gingival display and her friends and family tell her that she has a beautiful smile.

In reference to the case spotlight “Diana, by Dr. Eizaguirre” formerly posted in this blog, we would like to dedicate some lines to the acknowledgement of Dr. Corvera and her team’s altruistic work on the case.

Dr. Corvera’s clinic was chosen by the patient to be the place in which to perform all four surgeries needed in the treatment plan, that’s to say: placing and removing skeletal anchorage for whole upper arch intrusion plus all the crown lengthening procedures in the upper arch and tooth 36 in the lower arch.

During her treatment, the patient visited Dr. Eizaguirre’s office for the basic ortho procedures but she also visited Dr. Corvera’s clinic for the following up of her intrusion at absolutely no expense to her.

Dr. Corvera is highly experienced in skeletal anchorage and has incorporated it in her office since 2006. She planned all the surgical procedures and the posterior study of the dentofacial results, including all the overlays shown in the case article without asking for any academic nor economical compensation.

As previously mentioned, with these lines we would like to not only acknowledge, but also to express our gratitude to Dr. Corvera and her team for all the effort in achieving such a successful result in this awesome case.


Want to control more forces and the transverse dimension? You can get additional training at the Section 4: Dentofacial Orthodontics Series. 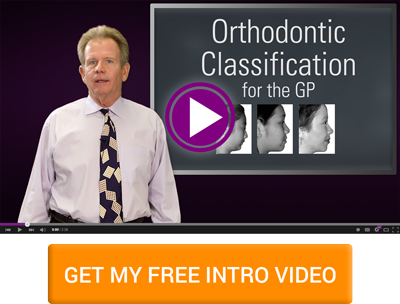