Click below to play the video or scroll down to read the full transcript.

DR. JEFFERY TAYLOR: The main impetus was so many students asked me to come up with a program to teach them that and there was more demand, a higher demand than I've got for any other topic in ortho. So that's when I came up with the course.

ANDI: How did you come up with the content for the seminar?

DR. TAYLOR: That's a very good question. I got a lot of it from Dr. McGann because I was his student back in the eighties and so I took what he developed for case finishing and then just expanded on it to make it fit like a 21st century type program. So as I said, he started it and then I just added a bunch of stuff to it and so far it's been very, very successful at the two locations we taught it.

ANDI: Tell me a little bit about the first time that you ran it here in Orange County.

DR. TAYLOR: Like I said I was very surprised the turnout was fantastic. We had, I think, 60+ doctors in the class and the best part was I had more compliments at the end of that seminar than I ever had on any other seminar and I've been teaching for 35 years. So that's a pretty high praise when I got so many positive comments. The students really enjoyed learning how to bend wire and having all that hands-on exercise so they could take that skillset home and start using it the next day on their patients and I think they appreciate that very much. That's very rewarding as an instructor as well.

ANDI: What are the most common problems that you see in the cases that you get from students when it comes to case finishing?

DR. TAYLOR: I would say the students don't take the time to develop a finishing treatment plan and instead of doing it all at one time with a strict set of plans, they just do it piecemeal and that wastes a huge amount of time. So not having a plan and then not executing it because they don't have one would be the second biggest problem. As far as detailed things are concerned, failure to bracket or band the lower 7's before we embark on finishing and then open bite in the bicuspids because that's the shortest tooth in the arch and those are the big problems I see all over the world for POS students. It's the same with orthodontic cases everywhere.

ANDI: What's the most common error in finishing?

DR. TAYLOR: The most common error is thinking that you can resolve everything with just bending wire and that's not true. That's why bracket repositioning is so important. And that was a concept from McGann, and again, just expanded by all the rest of our instructor stuff.

ANDI: What's the difference between bending wire and repositioning the brackets to finish a case?

DR. TAYLOR: That's another great question. If you bend wire, that occurs right at the very end of the case so the braces will come off say in 3 to 6 months. But if you reposition brackets like POS teaches today that happens at the beginning of the case. So you hold the teeth in the most stable possible position for the longest period of time for a much, much better retention regiment. So repositioning brackets is very important. A lot of students think it's a bad thing, like it's a shameful thing to reposition brackets but it's a very good thing and it's very wise. I've developed a strict protocol exactly how you should do it in the class so that it goes smoothly and efficiently and it doesn't waste any time at the chair and all that kind of stuff. Because you know the only commodity to we have to sell is time, so the more efficient we can be the better our practices will be. So we still have to get an excellent result for the patient but using that finishing protocol or bracket repositioning protocol has helped a great many students.

ANDI: On a side note, how do you teach students how to let the patient know that they're going to reposition so the patient doesn't feel like that student made a mistake?

DR. TAYLOR: Oh that's also a very good question. I would not talk to the patient about that and I would say in the beginning your teeth were in such a position that the brackets couldn't go on perfectly but now that they're almost perfectly aligned we're going to refine the position of the brackets again. So it's never a mistake it's just a revision, right? 'Cause no one wants to make a mistake.

ANDI: Or at least admit it to the patient!

DR. TAYLOR: Exactly. But it's not truly a mistake because a lot of times the brackets just can't go on correctly for a number of reasons.

ANDI: Well students always say that they're embarrassed to reposition because they feel like that person is going to think “oh they must have not known what they were doing at the beginning” but there are many reasons why you'd reposition a bracket.

ANDI: They're terrified to reposition brackets, so...

DR. TAYLOR: Exactly. And that's so true. When they reposition the brackets sometimes they put them on in a worse position than they took them off of there. But I've developed a system that they will supposedly use from my class forward to eliminate that problem. Because there's a strict protocol and if you follow that it's very difficult to make a mistake. But if you try and shortcut it, it's exactly what you said. They'll be in even worse shape than they were in the beginning and I've seen that plenty. And I've made that mistake plenty of times in my own practice.

ANDI: So how did you get so good at finishing?

DR. TAYLOR: You know, 35 years of doing something you get pretty good at it. So it's just experience. You just have to do a ton of it. There is no better teacher than experience and that's why the closest thing we can do is just have them do this hands-on exercise in class so they can take that skill set back. So many doctors are just paralyzed with fear at the idea of bending a wire that they're going to make a mistake and I keep telling them it's not going to kill the patient, you know. It's just like a little teeny bend in the wire so just you look at it,  do it, and then see what the result is, and then modify it after that. It's been a very successful system. And my docs, like I said, have been super happy with the results of the class.

ANDI: How can POS students get better at finishing?

DR. TAYLOR: Again, it would just be a matter of them following the protocol and starting a bunch of cases so that they can finish a bunch of cases because like I said the best teacher is experience. And only if they take the time to execute this finishing treatment plan and provide the best possible care for their patients will they get good at it. It's just like anything else you have to practice it before you can get good at it. I always feel sorry for these docs that only have like one or two cases going but by the same token they have plenty of time to finish them very nicely as long as they are efficient with the rest of their treatment. Because that's another problem is when you run out of time. But if you're not efficient during the treatment and told the patient two years and now you only have like one month to finish it. Many times that's not adequate. So I stress that in the class as well that they need to be as efficient as they can to allow time for the finishing to occur.

ANDI: So say a typical case is 24 months. Is that accurate? How many of those months would you say is a finishing stage?

DR. TAYLOR: Very good question. I would like them to end up with 4 to 6 months to spare for the finishing. And many of the cases need 0 finishing today if they follow the bracket reposition protocol properly. But still it's nice to have that window. So you're exactly right. If you waste time during the formal mechanics treatment, then you short the patient on the finishing stage. You know, the patients say look you told me two years and it's got to be two years.

ANDI: Alright, so final question. What's the one thing that POS doctors can do to improve their cases?

DR. TAYLOR: Two sets of bracket repositioning, that would be my best advice. And most of them will do the first one but they're reluctant to do the second one for some unknown reason. But that's what I stress in class so much is to study the case at the very end to find out what would be the best possible finish but they don't want to take the time to do that so I say look take these records and sit down at your desk and set aside time to do this step properly and don't try and rush that. You cannot execute this well at the chair. I mean after years and years of experience you could do it on the fly but in the beginning you need to make a formal list and buy new brackets and we go through all of the stuff that would make that happen. So it's like anything else. It's just establishing the discipline to do that.

ANDI: Well thank you Dr. Taylor for coming and chatting with me today about orthodontic case finishing. If you have any questions about what you've heard today or any of our upcoming classes please give us a call or shoot us an email.

TAYLOR: Thank you Andi for the interview.

Got a question for an instructor? Leave it in the comments below for our next instuctor Q&A video! 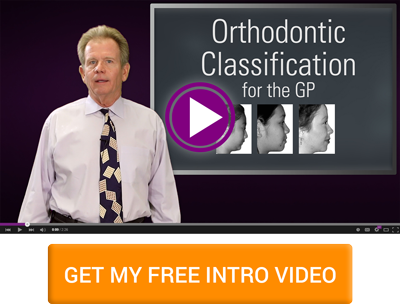